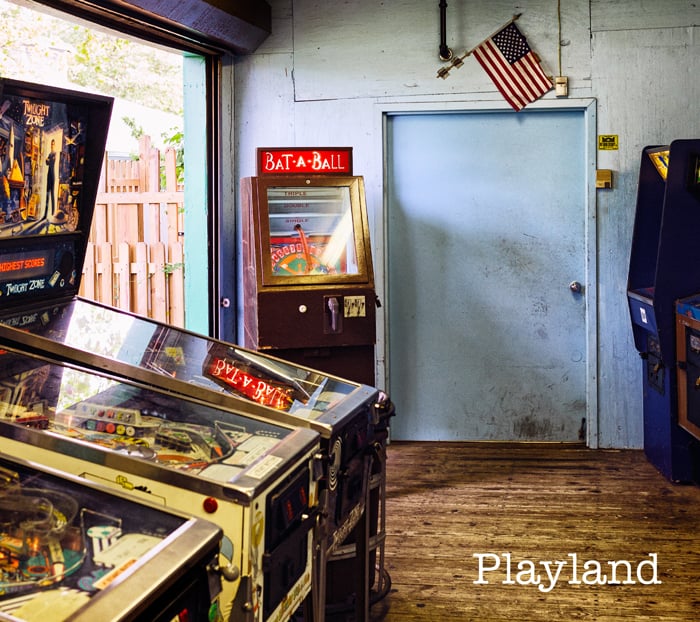 "Bright colors, games of chance, singing chickens? Playland in Rye, New York has all of that. I found it interesting to explore this Art Deco amusement park--first opened in 1928--and see what happens when you mash-up different decade's ideas of fun from Skee-Ball to Space Invaders."

Playland by Stephen Schaub is a collection of twenty-two photographs of the famous National Historic Landmark that was used as a backdrop in countless films and television shows. Most notable was the 1988 movie Big starring Tom Hanks where the lead finds magic at the "Zoltar the Magnificent" fortune teller machine. Schaub finds that magic in Playland's Icee stands, boardwalks, and arcades. The pictures in Playland are not all glossy nostalgia. Schaub balances a century of wear and tear with shiny new prizes. A family eats lunch behind the Starship 2000 Gravitron. A game attendant leans over the counter looking for players.

Playland is part of "One Week One Book", a series of photographic art books that explore a single theme. Anthropologic, quirky and sometimes voyeuristic, the books look at wide-ranging subjects, from portraits of the backs of people's heads, to still-lives depicting the contents of their refrigerators. The title of the series, "One Week One Book", is both a statement of artist intention and call to action for the reader. Schaub challenged himself to make a photographic essay on a single subject, and turn it into a book, every week for twelve weeks. READ ABOUT THE SERIES

Playland is available as a single book or in a set of twelve titles.