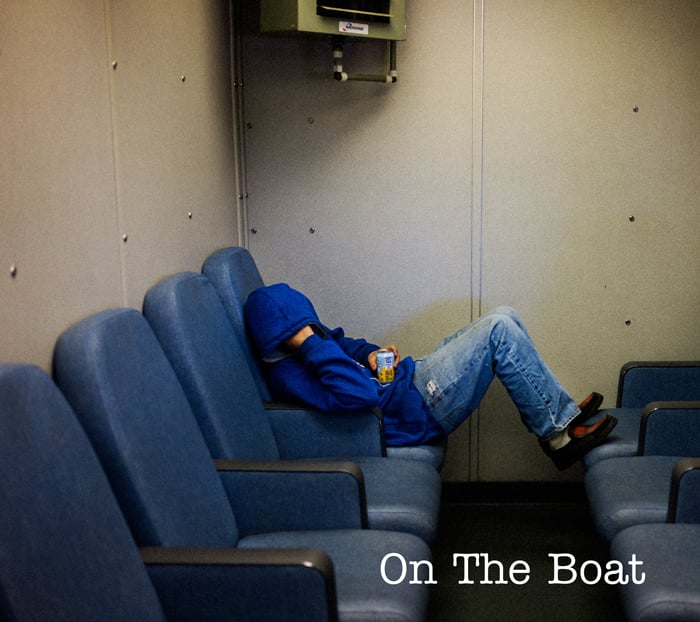 "When people get on ferries, they go into this other world. It's really kind of weird. On some ferries, people would just sit in their cars and crack open a beer...on the small, little ones in Vermont. But the really big ones, like at Orient Point, that's an hour-long ferry ride. It was like we were all on a spaceship to another planet and people went into their own worlds."

On the Boat by Stephen Schaub is a collection of thirty-five photographs shot on ferries crossing Long Island Sound and Lake Champlain. The pictures explore the liminal space between, or more accurately, the space in which people put themselves while crossing.

"In this state of suspended animation--between one purposeful activity and the next--what do people do? They hunker down, they nest, they play, they contemplate. They look at the map, they snooze. The boat tries in its way to be our temporary world: there are rooms with chairs, racks and brochures, food to eat and signs to read."

On the Boat is part of "One Week One Book", a series of photographic art books that explore a single theme. Anthropologic, quirky and sometimes voyeuristic, the books look at wide-ranging subjects, from portraits of the backs of people's heads, to still-lives depicting the contents of their refrigerators. The title of the series, "One Week One Book", is both a statement of artist intention and call to action for the reader. Schaub challenged himself to make a photographic essay on a single subject, and turn it into a book, every week for twelve weeks. READ ABOUT THE SERIES

On the Boat is available as a single book or in a set of twelve titles.