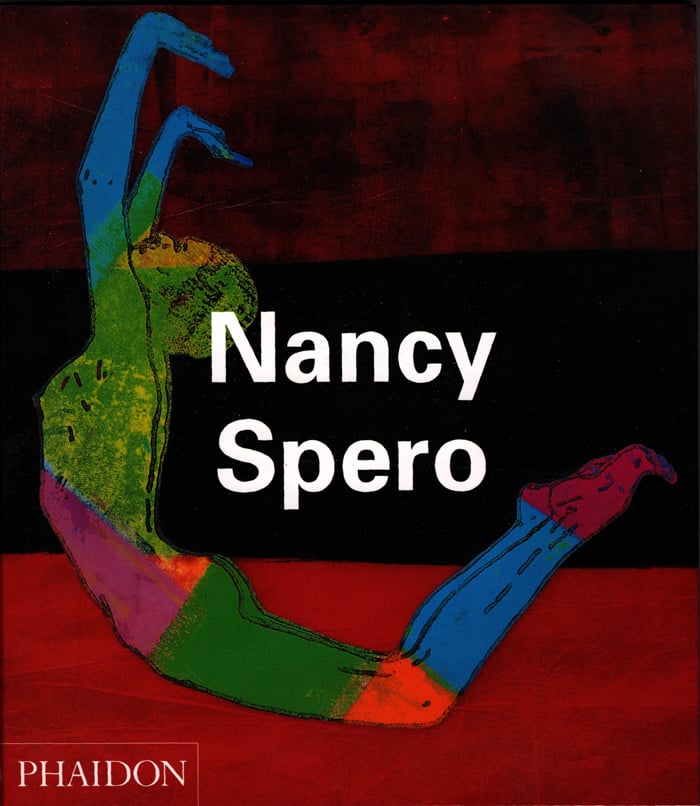 Published in 1996 by Phaidon, Nancy Spero is an appreciation of the inspiring feminist artist and activist. The volume features a Survey by Jon Bird, Interview by Jo Anna Isaak, Focus by Sylvère Lotringer, Artist's Choice by Stanley Kubrick and Alice Jardine, and Writings by Nancy Spero.

American artist Nancy Spero (1926-2009) concentrated on the depiction of women: mythological women, movie women, tortured women. Inspired by classical and modern sources, she collaged and imprinted her contemporary goddesses on to long, papyrus-like friezes that scrolled around museum walls.

Her subject matter, which ranged from the writings of Artaud to the Vietnam War, mirrored her life. Working in Paris in the cultural ferment of the 1960s, she moved to New York in the 1970s to co-establish the feminist gallery A.I.R. and to join with artists and critics such as Leon Golub, Robert Morris and Lucy R Lippard in forming the Art Workers' Coalition. Starting in the 1980s, she attracted international acclaim, her exquisite works giving form to feminist issues and new critical discourses.

The Survey by Jon Bird, cultural theorist and curator of the first British retrospective of Spero's work, discusses developments in her practice from the 1950s to the 1990s. Contemporary art scholar and critic Jo Anna Isaak talks with the artist about her life and work. Art historian Sylvere Lotringer, Editor of Semiotext(e) and author of Overexposed, focuses on her 1993 installation at the Whitney Museum of American Art. In recognition of the impact Stanley Kubrick's Dr Strangelove made on her, Spero chose a scene from the screenplay; key excerpts from Gynesis: Configurations of Woman and Modernity by feminist theorist Alice Jardine on the place of women in a patriarchal culture complete the Artist's Choice section. Also included are a selection of Spero's own writings, many published here for the first time.

This volume is in new condition.