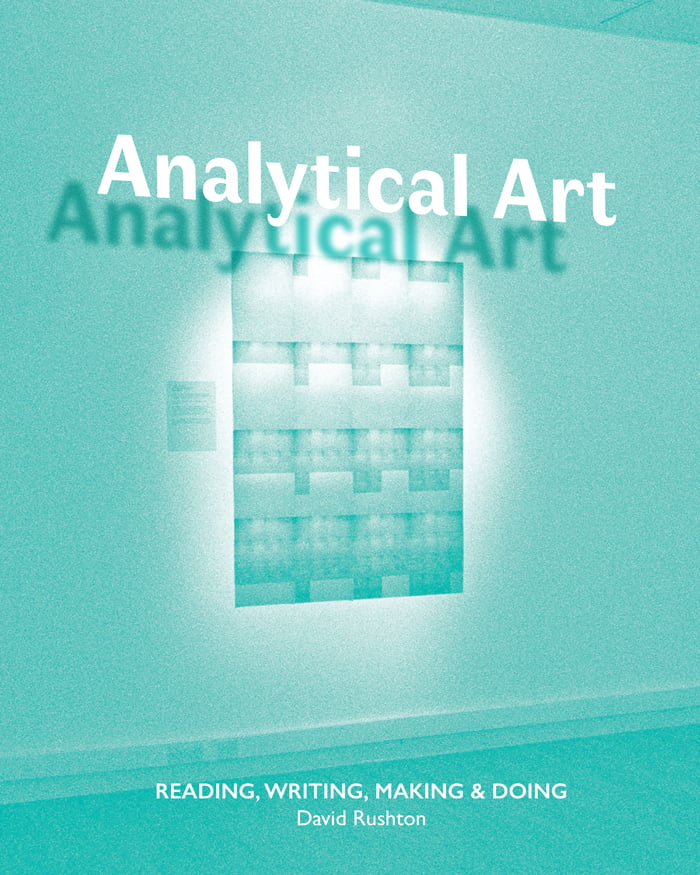 In the late 1960s, British Art Schools taught little conceptual art, research or theory. Dissatisfied with the lack of attention to this emerging art form, and the removal of the few interested staff, a group of students rebelled at the Coventry College of Art and organised their own course which became Analytical Art. At the heart of their inquiry was a question about the nature of art itself: Was art born out of the material used or did it spring from the mind of the artist? To wrestle with this question of ‘the material’ versus ‘the concept’, the students attended Oxford University tutorials in philosophy and produced work that explored (not least) the paradigm of art, a theory of models, responding along the way to Donald Judd's tautology, Joseph Kosuth's propositions and Marcel Duchamp's ready-mades. As students they exhibited in the 7th Biennale des Jeunes Artistes (Paris, France, 1971) at Lanchester Polytechnic (Coventry, UK, April 1970) and at Nova Scotia Collage of Art and Design (Halifax, Canada, 1970-1972). Between 1969 and 1973, a handful of students published their research in the self-edited journals Statements and Analytical Art. "On graduation in 1972 two of the editors of the student journal Analytical Art, Philip Pilkington and David Rushton, merged their activities with Art & Language. By 1973 Analytical Art had been wound-up."

In Analytical Art: Reading, Writing, Making and Doing 1969-1973, one of those students, David Rushton reproduces (mostly) the unpublished work of Analytical Art along with a contemporary essay by Mark Dennis and Chris Gomersall. The result is a window into the foundational years of British Conceptual Art where ideas of an emerging non-material art were being worked out in real time. Presented in chronological order, the book affords the reader an opportunity to see the evolution of ideas that have become staples of present day art discourse.

"The ‘Art Theory Course’ stole the vocabularies of art and aesthetics away from their circumscription by philosophers of art, critics and art-historians and as such was positively emancipatory. The chutzpah and bravado of these students and teachers offered a direct provocation to the perceived intellectual laziness of the art school and the ramifications go beyond what is contained in both these texts and any original course document."

About David Rushton
David Rushton was a founding editor of Coventry-based Analytical Art in the 1960s and subsequently worked in Art & Language from 1972 to 1975, notably on the Art & Language Indexes. Rushton was a key agent in student-led activism and print throughout the 1970s and co-edited Politics of Art Education with Paul Wood (Studio Trust/Scottish International Institute, 1978). Rushton began producing intricate scale models of art and social incidents in 1965. When he moved to Scotland in the 1970s, he split his time between an analysis of art education and communications policy (pioneering local television). Since leaving Art & Language, he resumed making and displaying 1/24th scale models of interiors to explore social conflict, art trade and new ways of interpreting art. In 2011, Rushton founded MERZ in Sanquhar, Scotland, with the objective of re-using and recasting narratives to explore reconstruction and fabrication in the arts. MERZ draws as a metaphor on Kurt Schwitters’ assemblages and the conceptual and protagonistic approach of Analytical Art and the early days of Art & Language. Rushton is also the Founding Director of The Institute of Local Television and opened the Museum of Model Art in 2019.